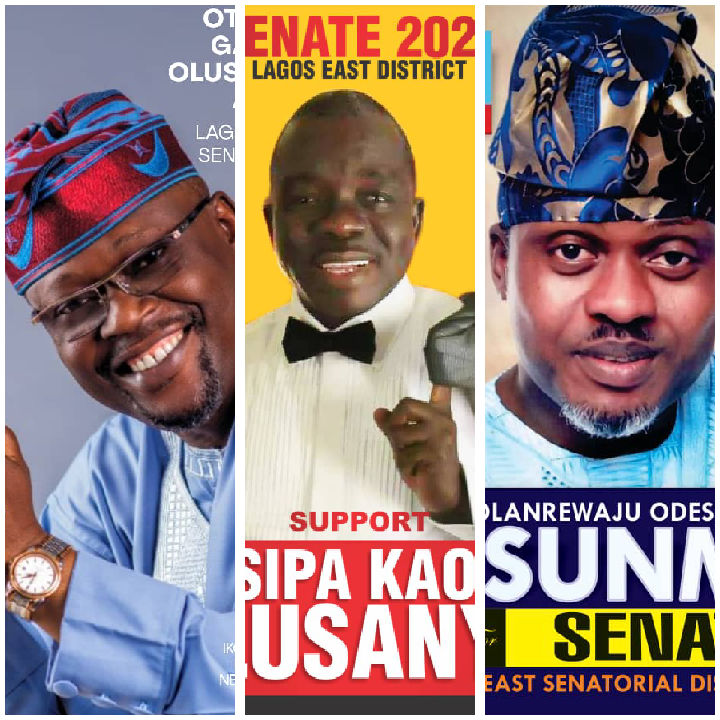 Since the sudden death of Senator Bayo Osinowo, otherwise known as Pepperito in June, who until his death was the Senator, representing Lagos East Senatorial District at the Upper Chamber of the National Assembly, there has been series of political permutations by gladiators across the the district to fill the vacant seat.

As at the last count, about six prominent Ikorodu sons, majorly from the ruling party, APC have thrown their hats into the ring to clinch the party’s ticket.

Similarly, an Ikododu born property mogul and gubernatorial candidate of the ADP in 2019, Mr Babatunde Olalere Gbadamosi who recently joined the PDP has also declared his interest in the vacant seat on the platform of the opposition PDP.

Prominent among candidates jostling to fill the vacant seat on the platform of the ruling APC are a former House of Assembly member, Hon Sunmi Lanre Odesanya, APC Lagos East Vice Chairman, Asipa Kaoli Olusanya and Otunba Ganiyu Olusegun Abiru who retired from the Lagos State Government as Permanent Secreatry and former Clerk of the Lagos State House of Assembly. He is currently the Chairman, Ikorodu Oga Development Association, IKODOASS

Of the three candidates who have so far declared their intention for the Senatorial ticket, one that has stirred most negative concerns, comments and criticisms among the rank and files of the Ikorodu APC and community stakeholders is the entry of Asipa Kaoli Olusanya who is the incumbent Vice Chairman, APC Lagos East Senatorial district.

His entry has been widely condemned and described by many as an affront on the Ikorodu APC and the entire Ikorodu people, considering the fact that he currently occupies the highest party position in the division and district as a whole, as APC Vice Chairman, Lagos East Senatorial District.

Another reason stated by the aggrieved APC members is the fact that, the same man denied the entire Ikorodu Division post-2019 general elections by ceding the only State cabinet position slot given to the division to his own blood daughter, who is the current Acting Commissioner for Agriculture, leaving several aspirants who lost the party’s House of Assembly ticket after spending fortunes ahead of the party primaries in the cold. This, according to sources is inspite of promise of compensation he made to them during the post-primary reconciliation meetings.

Others have stated that, being the sponsor of the famous ‘Sins of our Fathers’ article written to discredit the leadership style of the two prominent Apex APC leaders in the division namely, Prince Abiodun Ogunleye and Ashiwaju Olorunfunmi Bashorun for giving local government Sole Administrators slot to their children and wives, it is uncharitable, immoral and a slap on the entire division for the same accuser who they say has done worse than those he accused of favouritism to attempt to ‘snatch’ another vacant senatorial seat from teeming APC members, especially the younger elements who worked very hard for the party’s victory during the 2019 elections, with little or nothing to show for it.

Reacting to Asipa Kaoli’s entry into the Senatorial race, an Ikorodu APC youth could not hide his shock counseled the APC leader.

‘Asipa Kaoli should step aside for the young ones to contest. He has done well and represented absolutely well.
Presently his daughter is the Acting Commissioner for Agric.  He is the vice chairman east senatorial district presently. Let him remain the kingmaker. We have enough credible younger ones that can fill up the seat’, submitted, Hon. Ahmed Olalekan.

‘A leader that gave the only political position available to the people of Ikorodu to his biological daughter who does not have the criteria or sagacity despite the number of intellectuals in our dear city. A lot of people in the party spent their money, strength,time and energy to my greatest surprise all we got as our representative was a foreigner imported from Ghana’. I guess APC is on the verge of loosing the seat’, submitted another  concerned stakeholder.

‘Ikorodu have started again. So, we no longer have young men to contest for the Senate seat? I thought same person supported Abiru last time.Why now?’ asked, Temidayo Hassan.

‘If it is truly about the interest of Ikorodu, we should look at the larger picture and support people with strong personality that can win on the strength of their character and not on the strength of their relationship with a leader. People that can stand alone and mobilize the People to queue behind them.  Ikorodud does not just deserve a representative at the red chamber but quality representation’, she said.

The condemnation of Asipa  Kaoli’s senatorial ambition has also gone beyond the party hierarchy to other community stakeholders in the division.

‘Let us please stop justifying a bad  position.We should meet and greet our elders in the place and the seat of honour and morality. God reminded and told Elijah when he thought and claimed that he was the only credible prophet in Israel who has never bowed down to Baal. God reminded him that He still have over 7,000 other prophets in the land Israel who have never bowed down also (and probably more credible than Elijah)’, noted Ohi Obadan, a notable community leader and social commentator.

‘Sincerely, I see Asipa’s show of interest in the senatorial race as someone that doesn’t have Ikorodu Division’s people at heart. Presently, he is holding a sensitive position in APC; the vice-chairman, APC Lagos east, So, his interest to vie for the Lagos East senatorial  ticket will make  him drop the position which of course will not be coming to Ikorodu anytime soon’, he said.

‘Again, Asipa Kaoli is 70 years old (not so sure) and I believe if favoured with this senatorial ticket he would come back to seek another term. This implies by end of 2027 he is close to 80 years! Check around you to see people of this age, how agile and fragile they are, no wonder we have many docile senators that are always sleeping during plenary sessions. No! Ikorodu division doesn’t need a sleeping senator’, he added.

Continuing,  Hammed opined that,’  Asipa has been in politics for long and I’m sure Baba should have more than enough boys in his camp and across Ikorodu division who fits in for the senatorial position. As a party leader and state vice Chairman (KING MAKER) with his biological Daughter as an Acting Commissioner, he should start practicing leadership traits by ‘positioning’ his proteges, wards, followers and leaning support to any progressive persons like Asiwaju Bola Tinubu has been doing’, he concluded.

Meanwhile, inspite of the wide criticisms that trailed his entry into the race, supporters of the APC Vice Chairman have described him as the best candidate to fill the vacant position from Ikorodu Division.

‘Well, looking at his aspiration I, being so desirous of the seat coming to Ikorodu and hoping to see APC ticket as well as PDP ticket given to Ikorodu persons, I see in Asipa Kaoli Olusanya, a material, who can compete for, and win the APC ticket among the political Giants now coming out of other divisions for the seat. For me, it is simply putting our best foot forward’, submitted Dare Odufowokan.

Given the forth and back that has characterized the process leading to the selection of the APC candidate in the forthcoming Senatorial Bye-Election, particularly among Ikorodu APC gladiators, it is hoped that the ruling party will not over-stretch its luck by presenting a credible and widely acceptable candidate for the people to elect into the vacant seat, as opposition PDP is eagerly waiting to cash-in on any mistake made by the ruling APC in selecting its flagbearer for the Senatorial bye-election.