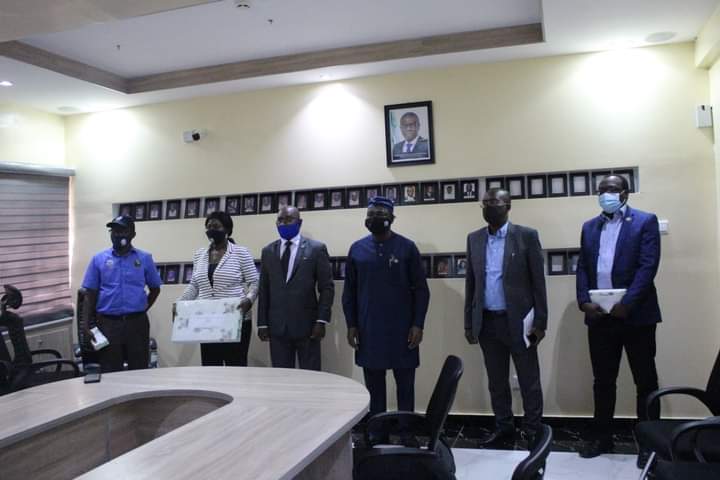 In order to encourage efficiency and enhance the performance of Public Affairs Officers, the Ministry of Information and Strategy, on Thursday, recognised some of its personnel for discharging their duties meritoriously as image makers of the government in their respective Ministries, Departments and Agencies, MDAs.

In a short ceremony presided over by the Commissioner for Information and Strategy , Mr. Gbenga Omotoso, at the Conference Room of the Ministry, the recipients were encouraged to take the awards as inspiration for greater accomplishments at their duty posts.

Omotoso acknowledged and expressed pride in the sterling performance of Public Affairs Officers in the Lagos State Civil Service, maintaining that the quality of news reports about the State across Ministries, Departments and Agencies, MDAs, ranks at par with global standards of reportage.

The Commissioner advised the winners not to becloud themselves by the desire for financial or material gains over professionalism and hard work, stressing that the gift items presented was just a way of appreciating their contributions.

In his words: “You should not always be quick to judge everything in Naira and kobo because the best things in life are such that cannot be quantified in monetary terms. By implication, the professionalism displayed by all of you is such that cannot be adequately rewarded in cash or kind”.

“I may not be sing-praising all of you for your contributions but I must assure you that none of your efforts has gone unnoticed. I have personally been taking records of performances and I can say that you have been on top of your profession”, Omotoso declared.

Also speaking at the award presentation ceremony, the Permanent Secretary in the Ministry, Mr. Olusina Thorpe, who initiated the reward system for the officers, explained that the idea was a way of promoting a healthy professional contest among officers to always give their best in service of the State Government and Lagosians as a whole.

He envisaged that efforts are already being intensified by other officers, who are also desirous of emerging as winners in subsequent editions of the Public Affairs Officer of the year award.

Thorpe challenged the winners not to relent in pursuing excellence but be triggered for higher performance in order to justify the recognition accorded them by the Ministry, assuring that plans are already being perfected to improve on the awards in subsequent editions.

Giving a background to the criteria used in arriving at the best officers, the Director of Public Affairs, Mr. Olumide Sogunle explained that the voting aspect of determining winners was just one of the parameters introduced to prune down the number of officers that vie in the contest.

He explained that other critical and more important criteria include the number, quality, timeliness and frequency of Press Releases issued by the officers nominated for the awards and their disposition to accuracy in reporting government events.

The first-prize winners in the awards were Mr. Ayodele-Ayomileleyi Afuwape, Senior Staff category – Public Affairs Officer of the Ministry of Tourism, Arts and Culture, while his counterpart in the Lagos State Environmental Protection Agency, LASEPA, Mrs. Bola Ajao won in the Management Staff category.

Other awardees in the Management category are Mr. Jide Lawal, Ministry of Agriculture and Mr. Divine Dunkwu of Lagos State Consumer Protection Agency, LASCOPA, while in the Senior Category, Mr. Debo Adeniji of the Office of the Head of Service and Mrs. Bisi Junaid of the Lagos State Health Service Commission emerged as the 1st and second place runner-up respectively.